Making Something Timeless is the Best Insurance For Your Creative Career

It’s easier than any time in history to go from idea to execution. What used to take months takes days and what used takes hours takes minutes. Because we can execute a plan in minutes, we expect to succeed with it just as quickly.  We chase trends, follow the advice of gurus, hop on bandwagons, and attempt to build  our presence on the platform that everyone needs to be on in the name of “building a personal brand.” You can’t build a creative career off  being a one-hit wonder

Temporary attention is alluring and intoxicating. The steps formulas and hacks are available in someone’s latest blog post or online course. But you can’t build a creative career off of hearts on Instagram, likes on Facebook,  retweets, or being a one-hit wonder. If you’re serious about building a creative career, the best possible thing can you do for your body of work; the greatest insurance policy is to make, something timeless, something that has the potential to be what Ryan Holiday calls a perennial seller.

When I started the Unmistakable Creative in 2009, I was deluded into thinking that I would interview well-known bloggers, they would share my interviews with their thousands of followers, and every interview would go viral. Within two months, I realized how flawed that thinking was. So I spent my time working on becoming a better interviewer. I’ve always said it wasn’t our guests who have caused our show to grow. It was our listeners.

Today, almost ten years later, many podcasters are operating under the same flawed assumption that I started in 2009. They’re more focused on landing famous guests than they are in mastering their craft.

By the time I interviewed Tim Ferris and Seth Godin for the first time, I had done almost 300 interviews. It wasn’t because I couldn’t land them as guests. It was because I knew the interviews would be much better after years of practice. And my conversation with Tim resulted in the video below.

If you read Ryan’s book, you’ll discover that many of the books that are on the New York Times Bestseller list today weren’t there until almost ten years after they were published. Ryan’s own experience reinforces this. His first two books, Trust me I’m Lying, and The Obstacle is the Way were not a commercial success when they were first published. It was almost three years after publication The Obstacle is The Way started to make its way around the NFL and go on to sell 200,000 copies.

If you look at the body of work that people like Mark Manson and Tim Ferriss have created, it’s clear they’ve committed to doing work that’s timeless. At Unmistakable Creative, we aim to create interviews that will be just as relevant today as they might be years from now.

A long-term view is anything but sexy or glamorous. It might mean that you linger in obscurity for years before your work is commercially successful or reaches a large audience. When you have a long-term view, you’re willing to go far past where the average person quits. You realize that there’s no such thing as an I’ve made it moment. You understand that little things done repeatedly lead to big changes, progress, and momentum.

In his book Deep Work, Cal Newport said the following about building a body of work in the age of social media:

The ability to access instant validation through quick feedback loops can give us the illusion that we are doing something of value when in reality we are engaging in something that requires very little depth or attention.

In 2013, I was frustrated that my writing and podcast had not led to a book deal.  When Julien Smith told me he wrote 1000 words a day, it was a gut-check moment. He had done the deep work necessary to build one of the most popular blogs on the internet, work on The Flinch with Seth Godin, and write a bestselling book. I hadn’t.

Even after self-publishing a book that became a Wall Street Journal bestseller, I didn’t have any interest from publishers. Looking back it was one of the best things that ever happened to me. Those two years gave me the opportunity to develop systems, rituals, routines, habits, and a lifelong creative practice that enabled me to write two books with a publisher.  If it had happened any sooner, I wouldn’t have been ready.

If you’re not patient, and you get an opportunity before you’re ready, it might cost you the potential for a lasting creative career. In her book Still Writing: The Perils and Pleasures of Creative Life, Dani Shapiro tells the story of one of her most promising writing students:

I loved this young woman — her old soul, her stubbier streak, her huge heart— and so I wish I could tell you that her story turned out well. That, as her classmates believe, her early book deal presaged a lifetime of literary achievement. Instead, she punished to finish the novel, and it was published with little fanfare. Critics were respectful of her talent but found the novel to be frustrating, undisciplined, uneven…. She never published anything again. Not a story, not an essay, not a book review.

Being patient allows you to focus on the process, not the prize. It gives you the time to build the skills that will be necessary when opportunity finally does knock. Just because you can take something from idea to execution in a matter of minutes, it doesn’t mean results will happen on the same timeline.

After writing millions of words and 100’s of articles, reading 100’s of books, and writing two of them, I’m convinced that I still have a long way to go before achieving mastery of my craft. In fact, it’s something I’ll be working on for the rest of my life.

The sections on mastery were the most difficult to write about in both of my books because it’s such a complicated subject. Medium marked my Ultimate guide to Mastering you Craft as  21 minute read, and I still think it barely scratches the surface. If something is going to require a commitment that take the rest of your life, it’s not likely you’re going to figure it in 21 minutes.

Anybody who has made art that stands the test of time, whether that be best-selling books, Oscar-winning movies, or Grammy-winning albums has spent years, sometimes decades committed to mastering their craft.

Ask yourself, are you willing to spend decades becoming so good they can’t ignore you? 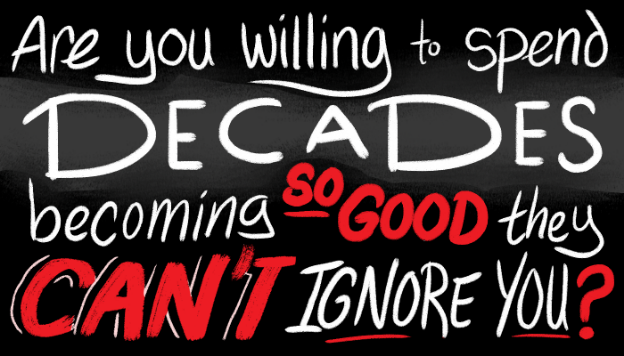 Many famous and commercially successful creative people could easily retire with enough money to sustain them for a lifetime. But they keep writing books, making movies, and recording albums. Every piece of work gives them an opportunity to grow, to evolve, and refine their skills. Every piece of work is an opportunity to create something timeless, a Perennial seller.  That’s because the best possible insurance policy for your creative career is to make something timeless.