The Most Valuable Thing Aspiring Authors can do For their Careers

In 2013, I'd been blogging for almost 4 years. I'd also been running a podcast called BlogcastFM, the precursor to Unmistakable Creative, where I'd learned every blogging strategy out there. But I still couldn't get a book deal. That was when I finally stopped waiting to be picked.

The most valuable thing I did for my career as an author was to self publish a book.

Self Publishing is Not a Field of Dreams

When you read the stories of people like Amanda Hawking and other self published authors, it's tempting to believe in the "if you build it they will come" mindset. Success with a self published book is not based on the kindness of strangers. That's a delusional view of self publishing.

Self publishing works because you already have an audience. You've focused on mastery instead of metrics. You've earned their attention and trust with 100's of blog posts, podcasts or whatever it is that gives them value. Even though Glenn Beck was the catalyst for my book becoming a best-seller, MY audience was the catalyst for getting the book on his radar. They bought the first 300-400 copies.

Self Publishing Allows you Test a Minimum Viable Product

The Art of Being Unmistakable was nothing more than a series of really long Facebook status updates that I compiled into a Word document. I wrote most of it in about 3 months. It's a short book. Publishing some of the excerpts as status updates allowed me to test all my material for resonance. If something got 100's of likes, I knew there was something about it that struck a chord with people. So, I included it in the book. Rather than spend a year writing a 200 page book with no evidence for whether or not people will like it, why not do something shorter, see if it resonates, and expand it. My self published book actually became the basis for Unmistakable: Why Only is Better Than Best.

Self Publishing Allows your Ideas to Spread

Ideas that spread can always make money, even if it's indirectly. But ideas that make money don't always spread.Our free e-book, The Compass has been downloaded more than 10,000 times. My self published book that became a best-seller was price at $2.99. AJ Leon's Life and Times of a Remarkable Misfit was downloaded over 100,000 times. The Kickstarter for the physical version of his book was fully funded in 4 hours.

Maybe the freakish success of authors like AJ Kamal Ravikant and everyone else who stopped waiting for the gatekeepers seal of approval isn't that freakish after all. Maybe they designed their ideas to spread instead of designing them to maximize book sales.

Self Publishing Can Prove There's Demand for Your Work

Publishers are not in the business of making dreams come true. They're in the business of minimizing risk, hedging their bets, and knowing that Michelle Obama will make up for the losses they take on every other author. That being said, a successful self published book can prove to a publisher that there's demand for your writing. It minimizes their risk.

A Few Guidelines for Self Publishing

Hire somebody to design an amazing cover

To say that Mars Dorian has played a significant role in building my brand is an understatement. When I self published The Small Army Strategy, the original cover was bland and boring. Mars read the book, loved it and said the he wanted to design a cover for it that would help sales. He designed my next book cover, our podcast logo, and did the chapter illustrations for my traditionally published book. Even when my publisher insisted on doing the covers, I always called Mars to get his input on how we could improve them. 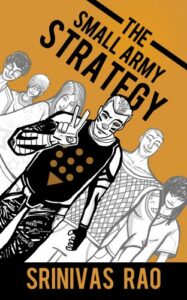 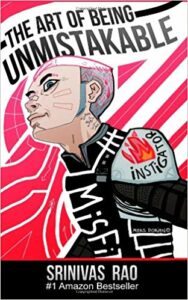 Price it Low or Give it Away for Free

If you're an aspiring author, who has never published a book, it's a bit insane to think you're going to write a New York Times Best-seller. The most important thing you can do for your work is to get people reading it. I priced the original version of The Art of Being Unmistakable at $1.99. When I found out I was going to be on the Glenn Beck show, I raised the price to $2.99. The book ended up being #7 on all of Amazon for a few days.

Whether it's a self published book, a blog post, or YouTube video that goes viral on the internet, you can't build a creative career by being one hit wonder. You need to have something to follow it up. If you have a blog, website, or podcast, it really helps to turn first time readers into long term fans. Many of my readers who buy all of my books were people who initially read the first book, became podcast listeners, and have purchased all of my other books.

Don't have any Expectations

This is the hardest thing about creative work. Nobody wants their work to linger in obscurity. But if you have too many expectations, you'll be disappointed. As Seth Godin said in his blog post about advice for authors "The happiest authors I know are the ones without high expectations."

Self publishing a book is not a magic bullet or shortcut. It's an opportunity to share your ideas, contribute something of value to the world, and give your readers a gift. The only viable long term strategy to build an audience for your work is to be so good they can't ignore you.