Excellent Sheep: The Miseducation of The American Elite by William Deresiewicz 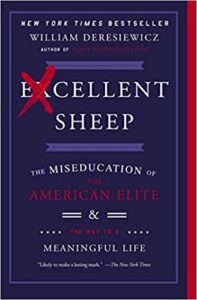 
Listen to the Interview

The system manufactures students who are smart and talented an driven, yes, but also anxious, timid and lost with little intellectual curiosity and a stunted sense of purpose: trapped in a bubble of privilege, heading meekly in the same direction, great what they’re doing, but with no idea why they’re doing it – William Deresiewicz

Growing up elite means learning to value yourself in terms of the measures of success that mark your progress into and through the elite: the grades, the scores, the trophies.

You have no margin for error, so you avoid the possibility of ever making an error. That is one of the reasons that elite education has become so inimical to learning.

Our glittering system of elite higher education: students kill themselves getting into it, parents kill themselves to pay for it, and always for the opportunities, it opens up. But what about all the opportunities it closes down— not for any practical reason, but just because of how it smothers you with expectations? How could I become a teacher, or a minister, or a carpenter? Wouldn’t that be a waste of my fancy education? What would my parents think? What would my friends think? How would I face my classmates at our twentieth reunion, when they’re all rich doctors or important people in New York? And the question that exists behind them all: isn’t it beneath me. So an entire world of possibilties shut, and you miss your true calling.

The child gives his parents what he understands they want, becomes the person that they need him to be. But the demand is insatiable, good enough (“only as good as your last sales quarter”) and so he tries to be perfect. Once this expectation is internalized, of course, it doesn’t matter where the needed affirmation comes from. All achievement becomes a stand-in for parental approval.

We mandate “activities,” so we reward joiners. We insist on “leadership,” so we reward climbers. We value those who give us what we want, so we reward manipulators. We punish those who will not play the game. We are robbing children of their childhood and teenagers of their adolescence. We have engineered a vast regimentation of youth.

“Efficiency” in the transmission of knowledge, not the unscalable craft of teaching, has become the cardinal value.

Life is more than a job; jobs are more than a paycheck; a country is more than its wealth. Education is more than the acquisition of marketable skills, and you are more than your ability to contribute to your employer’s bottom line or the nations GDP, no matter what the rhetoric of politicians or executives would have you think.

Society is a conspiracy to keep itself from the truth. We pass our lives submerged in propaganda: advertising messages, political rhetoric; the journalistic affirmation of the status quo; the platitudes of popular culture; the axioms of party, sect and class; the bromides we exchange every day on Facebook; the comforting lies our parents tell us and the sociable ones our friends do; the steady stream of falsehoods that we each tell ourselves all the time, to save off the threat of self-knowledge.

You can endless delay gratification doing work you hate because of the promise of future reward, or you can find your way to work that is its own reward.

Money and status are not enough for sustaining a purpose, and neither is the so-called realist’s goal of “just earning a living”— the problem being exactly with that “just.” Next time someone tells you that you should forget about finding a sense of meaning or doing what you love and just worry about earning a living, ask yourself if that’s what they did. Chances are it’s not, and if it is, ask yourself if they seem like a happy person.

In order to invent your life, you need to overcome that thing the system is so good at inculcating: fear of failure.

Status is a funny thing. Money gets you stuff, at least. Status doesn’t get you much except the knowledge that you have it. And while money may not make you happy, it is easy to imagine someone who decides they have enough. With status, you can never have enough. It is comparative and competitive, by its very nature. It doesn’t just not make you happy: it actively makes you unhappy.

Here’s a rule of thumb: if you aren’t giving anything up, it isn’t moral, and it isn’t courage. Stumbles, sacrifices, inner struggle, false starts, and wrong turns, conflict with parents and peers— these are some of the signs of the engine article. They know it’s real is if it hurts.

Having the freedom to invent your life is a privilege. Being able to follow your passion might be the ultimate form of entitlement.

Finding yourself means finding who you are outside the framework of school. Extracurricular activities and summer internships are not enough, because they aren’t the real thing— the stakes are limited, the conditions artificially restricted, the range of options relatively small.

Inventing your life is not about become an artist or activist or entrepreneur or any particular thing. It is simply about finding your way to work that’s right for you, whatever that may be.

Life is tragic, which means, among other things, that you can’t have it all. And it’s going to bad for a while. You will wander; you will blunder; you will lose heart. You’ll have to endure the pity or scorn of your peers, your parents’ friends, maybe total strangers. People will wonder what happened to you-you seemed so promising in high school. You’ll probably go through a period of depression as I did more than once. You will agonize as you have to. It’s going to suck a good deal less if you can find a supportive community, in college or afterward, or even just a few sympathetic friends. But you can get through it. You can get past it. You can find a way to invent your life.

It’s not enough to resist accepted ideas; you also have to resist the people who purvey them, which is pretty much everyone, your parents, your teachers, your peers, your friends…. IN every context there are questions you aren’t supposed to ask. The job of a leader, the job of a thinker, is to identify and ask them. This is where courage comes in.

Art brings us home by taking us abroad.